I started looking for a job change in Escotel for quite some time due to the fact that the job was getting monotonous and the rumours that they are going to sell off Escotel(which happened in 2005-06). Shafeek had joined Airtel, Kerala during that time as the RF Manager and I told him to refer me if he has some contacts. He being a sincere and honest friend(I have very few like him) referred me to Pritam who was the CTO for South, who inturn asked V.Kumar (Head Tech,TN) to interview me.

Kumar called me for an interview and I went to Coimbatore for the interview. I still remember it was a Harthal day and Shanavas dropped me in the Rly Station. Stayed at Kochachans place the night and attended the interview on Saturday. Interview went well but the pay they offered was not very promising. The position was too good to neglect, Head-BSS for the state of TamilNadu,with 15 engineers reporting directly to this position. I decided to take the offer.


See my Team below: 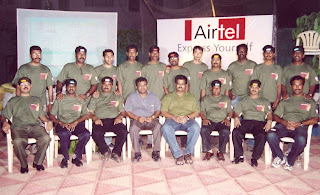