I celebrated Onam in Kerala with Ammoomma after 8 long years. Onam Sadya is not the same anymore. Since it was extremely difficult to cook everything at home, they used to buy cooked food on the day. Ofcourse it has its advantages and disadvantages.Triggered by Veena's phone call on Onam celebration in Bangalore, I proposed a "potluck" system as in USA, so that there is not too much burden on any particular person, and everyone will make something, and the benefit is that all will eat home cooked Onasadya than from some crappy place. So the "Pact" was made and all the participating ladies - Santha chitta, Chilli chitta, Amita Kochamma and Amma signed the same. The "PACT" was finally approved and signed by Achan and Chief Executive Approval by our beloved Ammoomma. Pictures shows all the moments including the copy of the "PACT". 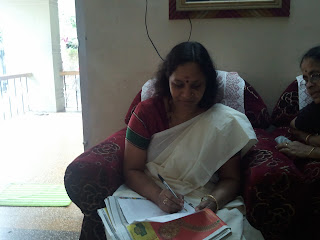 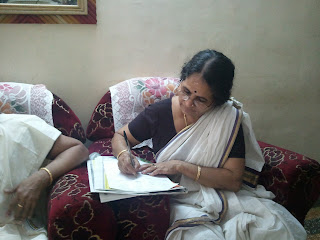 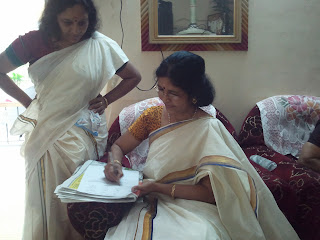 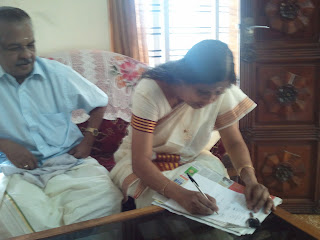 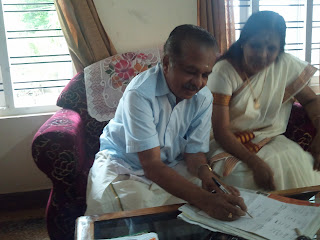 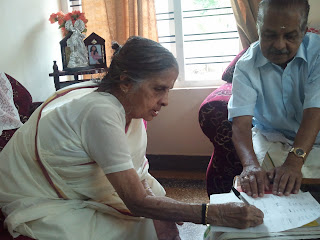 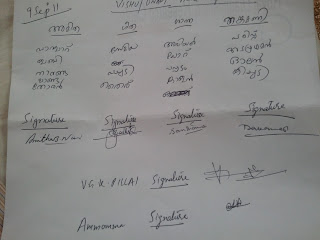 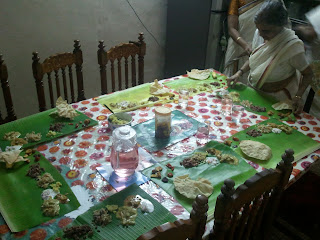 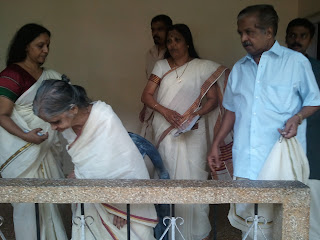 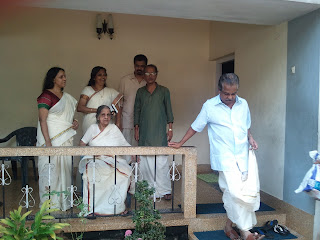 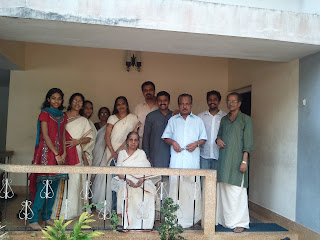 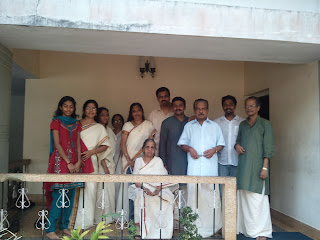 Hope we will enjoy home cooked food during auspicious days.
at 10:55 PM No comments:

Email ThisBlogThis!Share to TwitterShare to FacebookShare to Pinterest
Labels: India - 2011

After multiple consultations with the orthopedic doctor for my leg pain he suggested first an dray followed by an MRI scan for me. Poor achan had to suffer a lot taking me around to see doctors and then waiting for the MRI. It was not so fun of an experience to do an MRI scan by lying without moving for close to an hour and inside the magnetic tube. I am not claustrophobic but still it was horrible. They put some music and onc point the song was from an old malayalam movie which meant "its the end of light and hope light will be there in the next birth" :-) wow, what a song for someone who is stuck inside a tube.....
at 10:06 AM No comments:

Email ThisBlogThis!Share to TwitterShare to FacebookShare to Pinterest
Labels: India - 2011

Yes, we had to separate the twins for the first time after they were born. The culprit was viral fever. Devu developed fever and I had to sent achan and amma on emergency basis on Friday late night due to the hartal call in Kerala. Poor achan and amma, they arched Tvm onlyby 130am and they were so tired. Unfortunately i didt had any choice. They stayed there for a day and returned with Ishu to prevent her from getting the fever. But the night she reached Chry she had high fever. Achan was in deep panic due to the history of Devu and he immediately hospitalized her with the help of Balan Kochachan, Amita Kochamma and Undri. Achan called me around 2am and I decided to start that Evening as that was another Hartal day. Vijay arranged the vehicle, so reached home by 9, by which time everyone came home after getting discharged from hospital. Ichu had high fever for the following 2 nights. Devu too had fever for many nights and started another round of antibiotictics. We took Ichu to Dr.suresh and he also prescribed her antibiotics. So Ichu will stay in Chry for another week before she goes back to her sister and mom.
at 10:00 AM No comments: