Devanshi and Ishanvi First 6 months
13July09:
July 13,2009..One of the most important days of our lives.We welcomed our fraternal twin girls into this world.
Anju, Sudha aunty and Vijayan Uncle and I reached the Providence St.Vincent Hospital at around 530am for Anjus scheduled C-section. I was freaking out, but she was totally cool, excited and eager to see the babies. After checking in at the maternity section, a nurse showed us our temporary room and took Anju's vitals followed by the anestheologist who explained all the procedures and Our Doctor came after that and confirmed that everything was going on fine.
Anju was wheeled in to operation theater around 730. I was asked to put on some scrubs and and wait outside the Operating room. I was in tears as I was so freaked out and concerned about Anju and our kids, and sweared that I dont want to be in this situation again..ever...
Our Doctor came out and told me it will be a couple of minutes before I can enter the room and that they will call me. There was another Old lady who was waiting for her daughter's C-section next to where I was sitting. She engaged in a conversation with me and that really helped to ease my tension. Around 755am, they called me in. 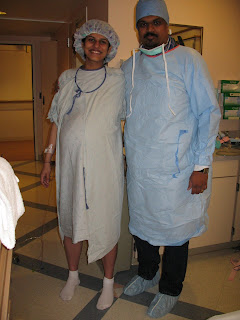 Tensed few minutes and Anju was shaking a little bit and I heard our Doctor saying.."Here comes the first one..and she is pooping all over my hands".. I was in tears and I saw our cute little one at 8:11am..DEVANSHI( we had decided to name the first one out to be Devanshi)..They showed her to Anju as well and took her for cleaning... Then Anju's body starting shaking like crazy and the anesthetologist said thats normal, and Anju told that she might throw up.. A minute later..there came our sweet little 2nd one at 8:12am..ISHANVI, she was covered with blood, when they first showed her to us..
After they cleaned both up, they were handed over to me and the anesthetologist(she was a big help, consoling me and Anju all through the process..). We showed both the babies to Anju and she was very happy. Doctor told me to take the babies along with another nurse to the recovery room and she told the nurse not to trust me for the size, I might fall down. They confirmed that I was fine and we took the babies to the recovery room where Vijayan Uncle and Sudha Aunty were waiting.. They were so excited to see their grandchildren.
Anju was bought in a little later and the nurses asked both of the parents to leave. I was talking to achan and amma and text’d Julio, Kirk, George and others..
They took the vital stats of the babies and moved us to a permanent room after a few hours.
Krishnan, Suja and Sidharth came to visit us later in the evening.
I was so tired by night and we requested to take the babies to the nursery. Vijayan Uncle and Aunty decided to stay there with Anju and I left for home. I was in a totally upset mood for leaving all of them there, seeing Anju so tired and all…
Next couple of days in hospital was good. We had nurses to help for everything, be it feeding or help changing diapers. But there was too much work for anyone who was there. Both of them were good, were sleeping most of the time.
We had visits from Julio and Family, Kirk and family, Maya and Sanju and George. They were all excited to see the babies.
The stay in the hospital was always busy with babies crying and trying to calm them down with formula or milk. Vijayan Uncle and Sudha Aunty stayed during nights and I covered days in the hospital. I learned changing diapers and burping the little ones( oh my, that was the most difficult one). Devu always used to be easy to burp and Ishu never had a burp. She had to be put back in the crib and then take back to burp. The nurses were the biggest help all during the stay and were so nice. The pediatrician we selected visited the babies and gave good reports for both of them,
We were about to be discharged on the 16th , but due to Anju not keeping well, it was postponed to the 17th.
We got discharged on the 17th and I had all the concerns in the world to take them home, worried about the heat, AC situation, apartment size, cooking, noise etc., etc.,
Krishnan came from office around noon and we got discharged. I took Anju and Kids along with me, while Krishnan took Anju’s parents home.
The following days were extremely stressful and tensed as both Anju and I were freaking out. The only reason we could survive that was due to the efficient support from Anju’s parents.
Krishnan and Suja visited us a couple of times. Maya and Sanju also visited us along with Ramaprasad Uncle and aunty.
I got all the birth certificates ready on the second week after going to the county office and took pictures of the kids and applied for their passports.
Every single day was a new learning curve for all of us. They acted differently and Anju’s parents took care of them during the nights. Vijayan uncle used to sleep during days to compensate for the loss of sleep at night. It was really tough for them and slowly they got used to it.
On the 3rd week of coming home, Devanshi spit up during sleep and milk came all through her nose. We were about to take her to the emergency room and She was crying like crazy ,but fortunately Sudha aunty made her sneeze by her "nadan" techniques. She was fine after a while.

We celebrated their 28th along with the Noolukettu on the 16th Of August. We had a few guests and Vijayan Uncle and Sudha Aunty worked really hard to cook food for all of them. Hats off to them on pulling everything together and taking care of the kids!!!!
at 1:25 PM