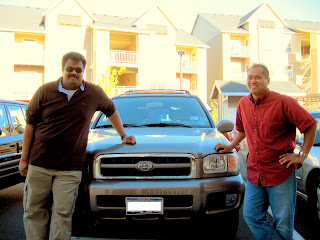 Me and Ronaldo in front of my NISSAN PATHFINDER. 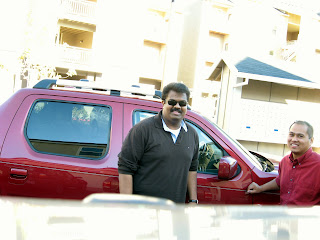 Myself, Conrado and Ronaldo used to stay very close to each other and travel the same route all the time to office. So we decided to start carpooling. As conrado was the only guy ( other than George) who used to reach office on time, we tried to follow his path.Ronaldo amd me were both lazy bugs who never gets ready on time. 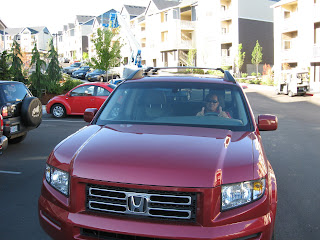 So when we started the carpooling conrado was the one who always used to get pissed. But we did carpool successfully eventhough there were lot of days in which we go seperate.
Conrado eventually went to East Coast for another project and the carpooling was between me and Ronaldo. There were no complicated rules as we alternate our cars every other day.Our only target was to reach office before Gurjeet....
Atleast two days in a week,20 mts after I wait for Ronaldo to turn up, I call him up, he wont pickup the first time, no answer 2nd time, and the 3rd time he will answer with a strange voice saying "Hey Manoj, u know what, I didnt sleep good, ps go ahead, I will come later"..... Means he is still sleeping... :-)
at 5:04 PM

i happen to meet manoj and family four yrs back.And since then we stayed together,worked together and he has helped me alot in those tough times in US for a while..

Manoj is a great guy to me.Othiri sneham nnaranje oru manushan. I am sure you will be a big gun in telecom. My Best wishes to You and Anju.

I like this site of yours.
rajiv-Yet another engineer.

FYI, these past weeks whenever I call Manoj in the morning when I arrive at his place, it is always his wife/personal secretary(Anju) that answers "oh Manoj, is still in the shower" or "he'll be down soon (after 20 min)"