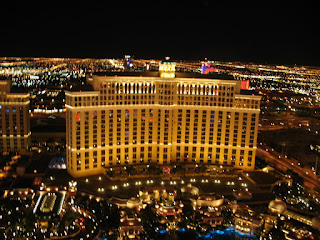 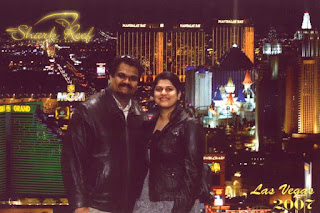 Monday Dec-24/07
Before we started our trip to LV, the only job Anju gave me was to ensure that our Ipod is properly charged and has all the good songs including Om Shanti Om. I started working on the same from Sunday evening while she wasdoing all the packing,Ironing stuff...yayaya..LAZYME.. 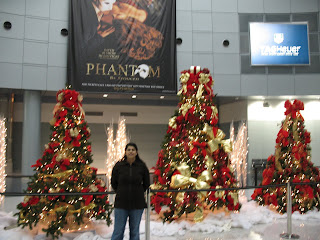 Eventhough I downloaded all the OSO songs, I was trying a new software instead the lousy iTunes.Finally when I was done doing all updation and 4 hrs to the flight, I checked to find out the Ipod was 30Gb clean with no songs.I immediately called Julio for help and he advised me to run REBUILD LIBRARY part from the software which I immediately did.I had to hard shutdown when Ronaldo came to pick us up at 3.30.I checked the iPod for the songs and found that it was partially recovered.Ooh what a sigh of relief... 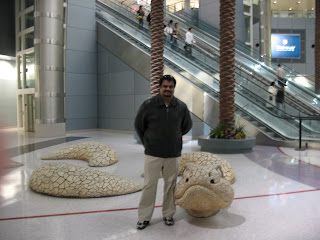 Ronaldo dropped us at the Trimet station and as soon as we boarded the train Anju wanted to hear the songs.I handed over to her with all the confidence and she started listening. But the fun only lasted for 15mts when the iPod died due to lack of charge..Oh man..I was really dumbstuck..the only job given to me was messed up in a big way. 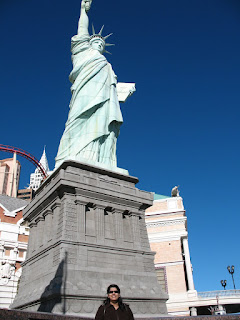 We boarded the Alaska AIrlies flight 600 to Las Vegas and I am writing this note now when Anju is sleeping after she desperately tried to turn it on one more time with no luck and one of those looks :-( The pilot warned of slight trubulance at LV,so when we landed the plane really toggled,first landing on the ground on the left side wheels, and right and again left and right, finally it did made the landing. 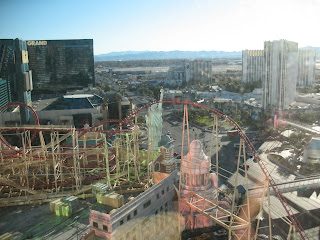 We came out took a cab to NEWYORK NEWYORK Hotel. We had plans to go out for dinner bt when we reached the hotel we were really tired. 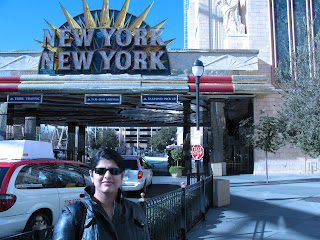 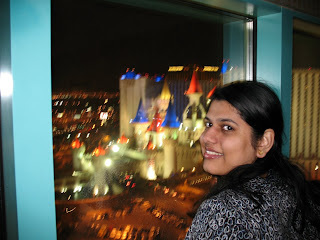 The Hotel as the name implies is a mini replica of Newyork and has the Statue of liberty,chrysler building and empire state building.I had earlier upgraded to a strip view room and the view was good.We ordered room service dinner and slept at around 1230. 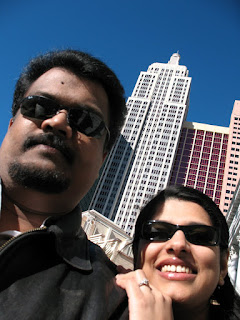 Woke up around 8am. Got ready and had breakfast from Starbucks. Decided to go visit couple of hotels nearby and went to MGM Grand. 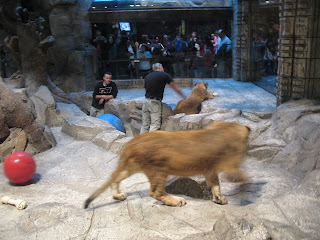 Saw the Lion show and the casinos.Started walking, and I think we walked for alomst a mile in the hotel and came to the monorail station. 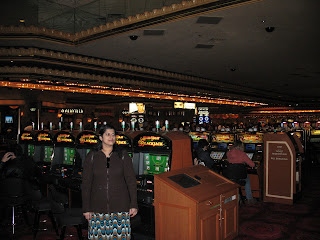 Took the ticket for unlimited ride for a day and changed our plans to visit CEASERS PALACE and hotels near to that. Took the Northbound monorail and got down at the Harah/Imperial palace station to go to Venetian. 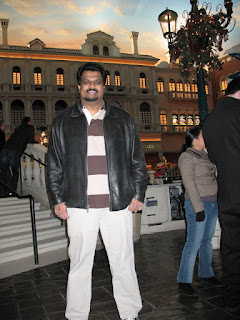 We had plans to take the Canal tour in Venetian Gondola at the Venetian, which is build like the city of Venice with water canal flowing through the hotel and canyons floating in that. 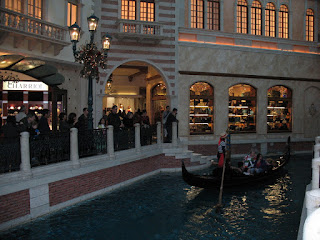 Seeing that we didnt find it very attractive to go in the boat/Gondola especially for people coming from the land of backwaters and another thing was that the Gondola driver makes stops along the way and sings when all the people walking by listens to him, a bit embarassing. 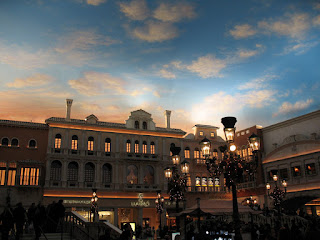 We sat there watching all those.Then we came out of the hotel and decided to try out the buffet at Wynn which was supposed to be very good.Walked and walked and finally reached Wyn which ofcourse was really cool.Finally when we arrived at the Buffet place there was a long queue, when we asked the waitress she told that the wait is averaging around 3 hrs.We quit that and came out , took a cab to try our luck at Ceasers palace. 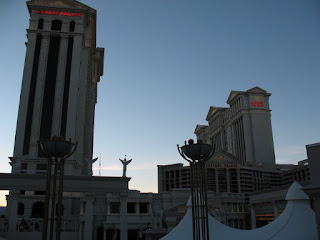 We both were really tired from the walk fm morning and I was terribly hungry.Again there was a long line bt not as bad as in Wyn.Finally when we sat to eat it was around 3.30pm.The buffet was really expensive at $30 per person.It was not that great of a buffet, bt I was really hungry and did justice to the money we paid. 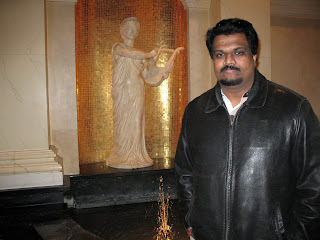 After having the luch buffet,which took close to 2hrs, we walked towards the monorail station at Flamingo hotel. Reached the hotel around 530pm. We were so tired of the whole marathon walking and started to sleep. I slept for an hour and we decided to go out around 8pm.
It was an awesome sight outside the hotel with all the lights,cars and people walking. 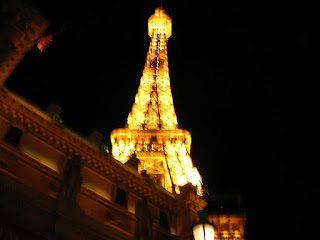 This hotel had the mini Eiffel tower which was around 500ft,so took the tickets and waited in the queue to go up.The wait was almost an hour and the tough part was inhaling all the tobacco smoke from the casinos.But when we finally took the elevator up.it was well worth the wait,the view was fabulous.We could see the entire strip area,the hotels and all the lights,really amazing. 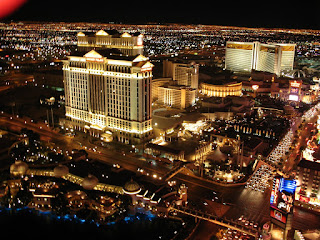 These are the photos taken from the Eiffel tower. 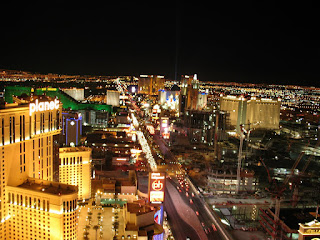 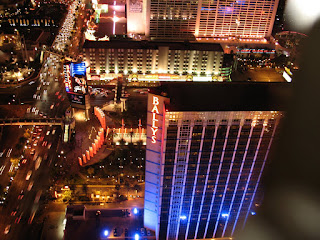 We waited for sometime in the area overlloking the Bellagio as we knew that there will be the famous MUSICAL FOUNTAIN SHOW at the Bellagio. 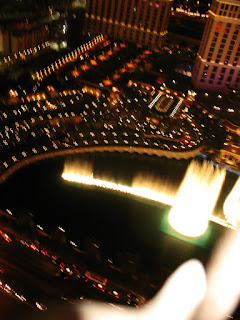 Oh WOW,then the musical fountain show started,it was an outstanding site to see.We watched the entire show two times.Spent almost an hour on the top eventhough it was cold.
Came out of Paris,took couple of snaps and walked towards our hotel,it was a long walk of 1 mile.No laughing,it was a great deal for me to walk that long after all the walking whole day long.Bought some burgers on the way from Mcdonalds and got in the room.Ate and slept after a very long day after the Disneyland trip. 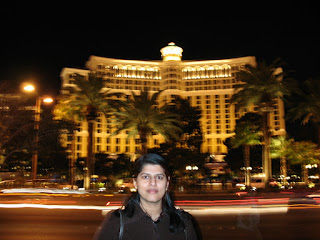 Advice:Las Vegas wont be a nice place for people with any kind of breathing problems.We both felt like we were chain smokers for years....
Wednesday Dec 26/07
Got up at aroud 830 am after a goodnights sleep.While I got ready Anju went down to the Starbucks to get our breakfast.Had breakfast and thought of having a late start.Got the tickets for the V show and went to Planet Hollywood hotel around noon. 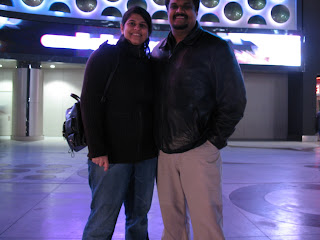 Found the V theater and took our tickets for the show.It was almost 3 pm and the Spice Market Buffet attracted me(eventhough I was not hungry) as this was the #1 rated Buffet in Vegas.
Had the buffet which had Asian,American,Italian,Mexican cuisines in addition to Seafood,Breakfast,Salad and Dessert bar.
Couldnt do much justice to the same as I was not feeling very hungry and Anju anyways is a poor eater. 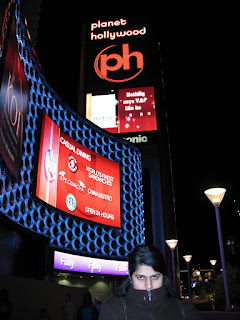 Walked back to our NYNY hotel and took rest for couple of hours.I couldnt even think of walking back to the show so took a cab in the evening at 630pm.Waited in the line for 30mts and finally they admiited us inside. 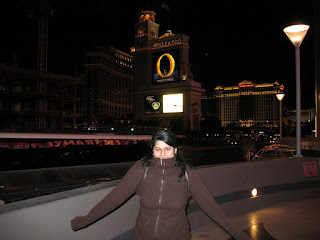 The V show was good and comprised of Comedy,Acrobatics,Magic and other performances.The comedy was really good and enjoyed every bit of it.Afterthe show eventhough we had free dinner coupons,Anju didnt feel like eating so walked back,enjoying the light on the way.I bought a Sub on the way,to have it for dinner in the room.WatchedTV for sometime and slept.
Thursday 12/27/07
Got ready at 9,when Anju got the breakfast from starbucks.Decided to go to Mandalay Bay,Luxor and Excalibor. 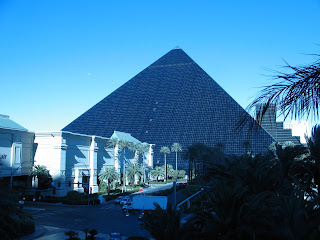 There is a free Tram these three hotels.Took the tram to Mandalay Bay.Whiile we were shooting pictures and handicam inside the casino a security guard stopped us from taking pictures from the casino area.Anyway we walked towards the shark reef aquarium,took tickets and visited the same.It was an above average aquarium much better than the Newport one. 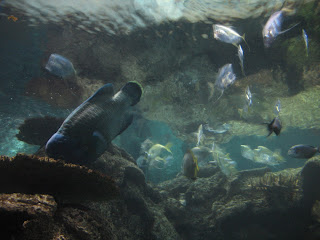 The best part was the ship wreck room, where u feel like u are in a wrecked ship under waterwhile all the sharks and other fish swim through the glass windowas above and below us.Even there was the sound effect of the wood creaking sound. 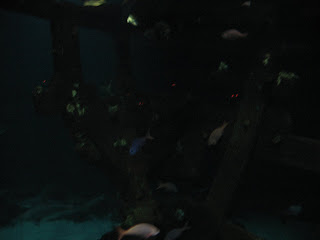 Came out of the aquarium and took the tram to Luxor.Luxor is built in the shape of the Egyptian Pyramid with Pharoah sculptures everywhere.Took a couple of snaps and watched the DEEP SEA 3D movieat the IMAX.This was one of the best IMAX theatres i have visited,the seating arrangement was great.The effects were good bt the movie was boring,SEA MONSTERS were much better. 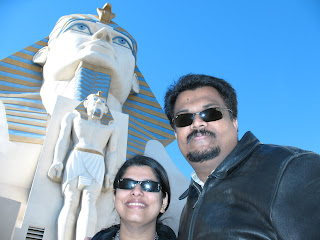 Came out and took a tour of the Pharoahs tomb whcih was not worth the money.Took a sub to go and took the tram back to our hotel. Thought of staying at the hotel till the extended time we payed for till 5pm.While having the sub called Manju to check the flight timings which was scheduled for1030pm,direct to Portland.Joy called back with the info that the flight is delayed by almost 3hours.Took the Alaska Airline number from him and called them to try for an earlier flight.The customer service at Alaska was healpful andtold me that they can rebook me on 515pm flight through Seattle and it was 345 when this coversation was going.I told them to rebook me on that and decided to take a shot.What followed then was really fast,fortunately Anju had already packed and she called thehelpdesk that we r checkingout and leaving the keys in the room itself.We took a cab at 4 and told the cabby of the situation.He was confident to drop us off fast,but the traffic was very high.This might have been the firt time we ever start for a flight from home/hotel with less than an hour for departure.We made it to the airport at 415pm and ran towards the security and there was a big croud.Anway we reached the gate at 450 and got into the flight...and I am writing this from the flight to Seattle.There is only a 40mts stopover time st Seattle forus to catch the Portland flight,Let see whethr I get that.....
Oh My.. we reached seatlle at 840 and the Portland flight was at 9, ran ran and ran and got it...Small Canadian air..This from the portland flight...
at 4:42 PM