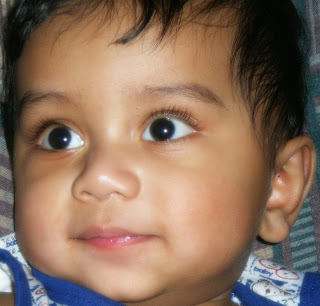 Manju and Joy had been calling me for a while to visit New Jesrsey to see our Pambu.They wanted me to visit before the little one gets a tooth so that I wont miss his cute toothless smile
Plans were all made in the last minute as I had to take a couple of days off to help with the accrual of vacation time-yep,thats another crazy thing here,once u reach some hours based upon the number of years in the company ur accrual stops unless u use some,and this happened because I didnt go to India last yr.
So after applying for vacation looked for tickets and found a great deal in continental,and decided to fly "ALONE" on Sat morning and return back Monday Night. 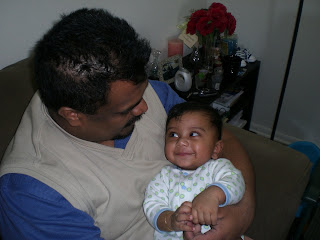 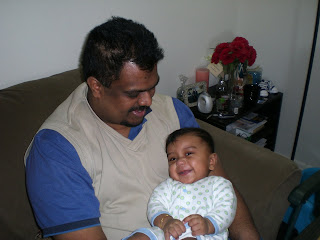 Got up at 4,dropped the car at the Economy parking lot and boarded the flight at 720am.It was an OK journey- reading,watching movies and listening to songs.Reached Newark Airport at 3pm EST.
To my surprise all Joy,Manju and Pambu came to receive me.It was a fabulous treat for my eyes to see Pambu(sorry,no photos till he is an year old),who was sleeping and had changed a lot.
While we drove back he woke up and was curiously watching the alien in his car.When we reached home and when I offered to take him in my hands,he immediately jumped forward and to everyones surprise held my face with his little hands and kissed me,both a wet and nonwet one.During the entire evening he never treated me as a stranger--so,there is definitely something called BLOOD RELATIONSHIP.
Manju had prepared an extensive dinner with Beef ulathiyathu---wow it was really yummy and it tasted like the one used to be made by Mallika chechi when we were in Dallas.(PS-As I am thin guy, cooking red meat is banned at our home completely by wife) 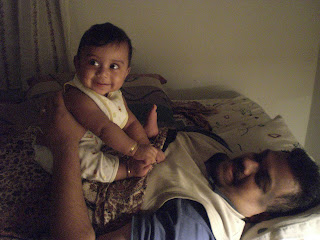 Got up at 10 and spend time with Pambu, the whole day was filled with his little chores and I enjoyed every bit of it.Manju was all ready to show her culinery expertise to satisfy her brother and made a great Biriyani..Pls dont think I am writing this just to Boast her. These dishes were really great,but pls dont ask her to make coffee,its just horrible ;-) We all slept after the heavy meal and had pizza for dinner.In the evening I got a chance to feed kichunni,I mean using bottle.Its funny to see Joy trying to sleep in the precious time he gets between all thats going on and he calls it POWER NAP evenif it is 10 times per day.

Manju and Joy took Kichunni for his appointment in the morning.They came back by 11 and we had iddli and chutney.Kichu was sleeping and got up later.Before lunch I got a chance to make him sleep also,I was always looking forward to this and finally...Manju was not giving up her skills and made shrimp,and wonderful pulisheri and Omlette for lunch. Joy dropped me at Rly station and I was missing Pambu all the way..... 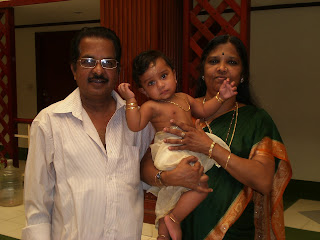 I told Manju and Joy ,no matter how we bring up our kids with the most modern facilities they will always miss the greatest fortune on Earth- THE LOVE AND PAMPERING OF GRANDPARENTS...

Email ThisBlogThis!Share to TwitterShare to FacebookShare to Pinterest
Labels: USA - 2008